Squeaky Wheels: Travels with My Daughter by Train, Plane, Metro, Tuk-tuk and Wheelchair
A Girls' Guide to the Islands

The Beautiful One Has Come

Call Me Okaasan: Adventures in Multicultural Mothering
Love You to Pieces: Creative Writers on Raising a Child with Special Needs
The Broken Bridge: Fiction from Expatriates in Literary Japan 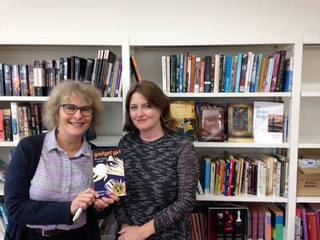 Here I am with poet Leah Sullivan at the Japan Writers Conference.

Suzanne Kamata was born and raised in Grand Haven, Michigan. She is most recently from Lexington, South Carolina, and now lives in Tokushima Prefecture, Japan with her husband and two cats.

Her short stories, essays, articles and book reviews have appeared in over 100 publications including Real Simple, Brain, Child, Cicada, and The Japan Times. Her work has been nominated for the Pushcart Prize five times, and received a Special Mention in 2006. She is also a two-time winner of the All Nippon Airways/Wingspan Fiction Contest, winner of the Paris Book Festival, and winner of a SCBWI Magazine Merit Award, an SCBWI Crystal Kite Award, an APALA YA Honor Award, and many others.